If Hillclimbing gives me a problem its the serious business of choosing my favourite hill. Gurston helps in this, as for me there isn’t enough to get your teeth into, especially for the driver of a lower powered car. But Prescott, Loton and Shelsley are up there on the list.  And now I have to add Harewood.  The HSA round at the Harewood Spring National meeting attracted a few of us from the south, several for the first time.

Harewood is an amazing hill. From a drivers point of view it’s challenging and an exciting drive, and spectators can see nearly all of the hill from the paddock.  Well worth the 3hr drive there and back. The drive was also made a lot more palatable in hindsight, as the fact that nobody from the HSA has attempted Harewood in a roadgoing 1.4 before meant that I scored a pretty respectable 15 points. Another highlight was the team of professional Yorkshiremen in the next paddock space musing on the fact that their car would go faster if they put the legendary Henderson’s Relish in the tank.   We’ll be going back to Harewood… 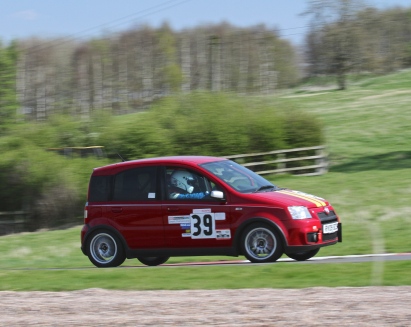 Work on the RF84 continues. In fact one noticeable thing is that the plastic boxes I used to store the parts are becoming emptier and sparser(?). The main focus is still on the rear end. Recently I’ve been rebuilding the rear uprights.

The trick of putting the bearing in the freezer and filing a small lead really helped assembling the whole thing.  Locking the locking ring (sounds a bit belt and braces but I’ll go with that..) is achieved using lockwire which passes through the upright and into a hole in the locking ring. Simple. If there are holes in the upright.  Which on one there weren’t.  It took a reasonable amount of nerve and commitment to drill them. As usual preparation was the key to not screwing up.  And amazingly I didn’t. 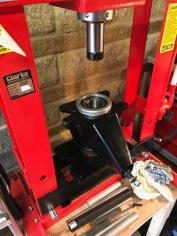 So once the upright and hub assemblies were back together I could properly rebuild the rear suspension.  Which was relatively straightforward, even though I’m yet to fit the rear anti-roll bar assembly.

The pace of the rebuild is being forced by two things.  One is the approach of some events I said I’d do, and the other is the fact that the trailer I have ordered is now complete and ready for collection.  The great thing about this trailer is that it will fit in the garage, but only with the car sitting on it.  Which means that the car needs to be in a form that can sit on a trailer by Wednesday.  That’s the Easter break sorted.